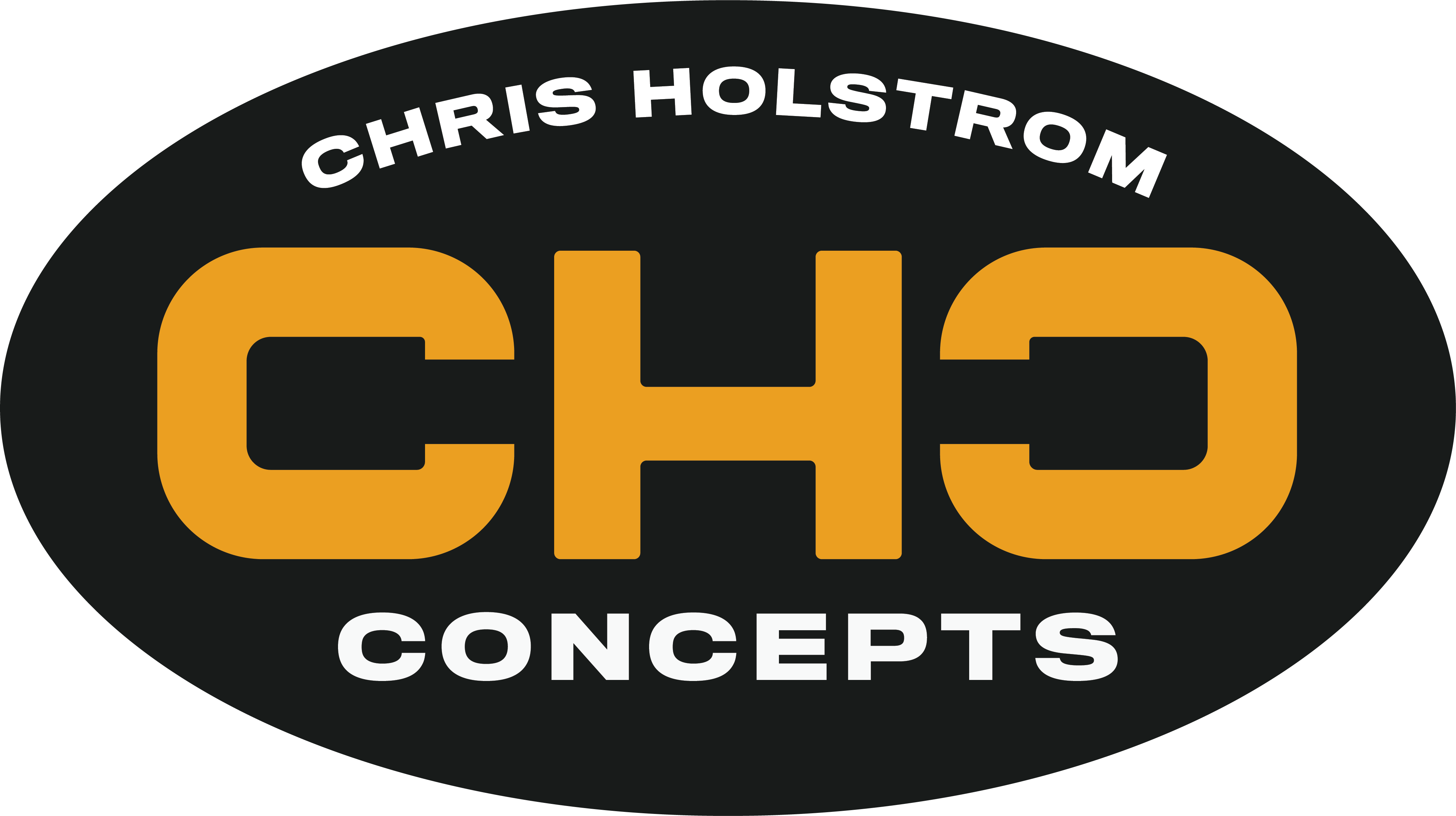 All of us know a variation of the same horror story: the silk purse bought sight unseen half a country away turns out to be barely more than a sow’s ear. Thankfully, nothing more than a bad dream for most, though it carries great weight with the few we know who’ve suffered that fate.

Add another victim to that list: Bryan Frank. What entered the blaster’s booth as a reasonable eBay find emerged with little more integrity than a widow’s veil. “The trip to pick it up was sobering—like attending a funeral,” builder Chris Holstrom notes. “The only things we could keep were the roof, driver’s door and fender.”

The story went south when Frank took delivery of the car. ’Tis true that it had a drag-racing background; however, it lacked the valuable pedigree that justifies the abuse that drag cars suffer. ’Twas also true that it came with a 302 and a Muncie. However, they were from other cars, effectively making this just another ’68 Camaro with an ambitious claim. But rather than a dark cloud of nothing left to lose, Frank and builder Holstrom saw a silver lining of freedom to do something different. “Dragging (it) home from Nebraska gave me lots of windshield time to dream about what to do with a rusty car that barely drove and stopped,” Holstrom notes. They pondered the idea that Chevrolet built the Z/28 specifically to compete in Trans-Am racing. “It only made sense to pay homage to it,” he says.

Imagine it as an SCCA-prepped car that evolved with the times. “As any racer knows, you keep updating as technology improves,” Holstrom notes. Only in this case he took the model to an extreme to explore an idea: what would such a car look like if it never stopped evolving? Thus began a two-year transformation. No, make that resurrection.

The Rushforth wheels evoke the Minilites common among Trans-Am racers of yore. Though Jason Rushforth designed them for this car, they’ve acquired a following of their own and, more recently, a name: Black Widow. These measure 18×9 and 19×11.5 and mount General Exclaim 275/40ZR-18 and 315/35ZR-19 tires.

The rear tires required wider wheeltubs, which, in turn, required the Guerrero boys at Rick’s Tanks to create a custom fuel tank with corners clipped to match. That tank feeds an LS6 plucked from the charred remains of an ’03 Corvette, rebuilt, and for a brief period, installed in a ’69 by American Touring Specialties (now Speedtech). In fact, it still sports one of the 11 accessory-drive systems ATS made prior to its acquisition by Speedtech.

“We really needed to make the engine look vintage Trans-Am,” Holstrom notes. The Edelbrock Victor Jr injection manifold and Accufab throttle body broached the issue, but the cowl-fed filter housing that Jared Hancock at J-Rod and Custom built drove home the point. “We painted the engine compartment gray like the boys did back then (and) stashed the ignition coils under the radiator,” Holstrom adds. Wegner Motorsports built the NASCAR-spec valve covers and world-renowned vintage Ferrari restoration shop Dennison International crafted the crankcase breather along the lines of the one Smokey Yunick bolted to the fender of his Trans-Am Camaro.

A dual-disc clutch couples that engine to a Viper-spec T56 transmission. Stainless Works built the headers to snake around it and the Speedtech subframe. Mike Sader built the exhaust from mandrel bends and Dynomax Ultra Flo mufflers.

Holstrom said he wanted to give the engine more room and feed it fresh air but didn’t want to resort to a cliché like a cowl-induction hood. Instead, he used a factory SS hood for its bulge and filled the vent openings. Jason Rushforth designed the truncated spoilers, including a rear one not present on the car in the photos. Rees Sanderson, aka The Carbon Guy, laminated them.

To better streamline the body, Holstrom narrowed the front bumper 1 1⁄2 inches and the rear 2 1⁄2. Rushforth redesigned the grille not with the rectangular turn signals but with round projector beams in their place. Flanking those are H4 conversion lamps; the rear sports Fesler Built taillights with Spaghetti Engineering LED inserts.

Gurtrudis Rosa applied the DBC-series Deltron. The VW Salsa Red evokes the ’69 Camaro that inspired enthusiasts 20 years ago to think in terms of lateral acceleration, RJ Gottlieb’s Big Red. And the graphic that Chris Holstrom and Josh Jones laid out tips its Stetson to the simple design that Smokey Yunick applied to his outlaw brand of road racers, among them another ’68 Camaro. Tahoma Glass in Puyallup re-glazed the car, Ogden Chrome in Ogden, Utah, plated the brightwork, and Proflections in Auburn restored all of the aluminum and stainless trim.

Jason Rushforth based the interior design upon the owner’s request to mimic the ’67 Deluxe interior. To execute it, Tony Miller at Stitches Custom Upholstery in Bremerton, Washington, chopped a pair of fourth-gen Camaro seats 9 inches and fabricated the center console. He clad everything, the Marquez headliner included, in a combination of black and white leather.

Bryan Frank may have paid money for a car that wasn’t exactly as advertised, but what he got was opportunity. No, there isn’t a feasible way to verify the claim that his ’68 is one of the 7,199 cars Chevrolet built as RPO Z28, and that’s unfortunate. But there’s no denying that he owns the only one of its kind, which is bragging rights on its own. The transformation spelled opportunity for Chris Holstrom as well; Bryan Frank is his first paying customer, this car his first official business project for his business, Chris Holstrom Concepts.

But Frank’s biggest opportunity comes with this car’s story. For when people ask what he did with that roachy Rally Green horror story, he can point in this car’s direction and proudly proclaim, “That.” 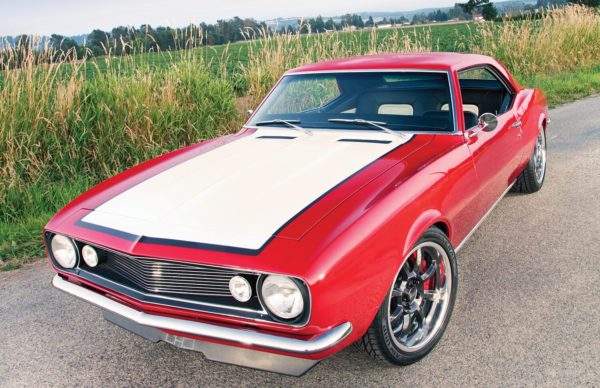 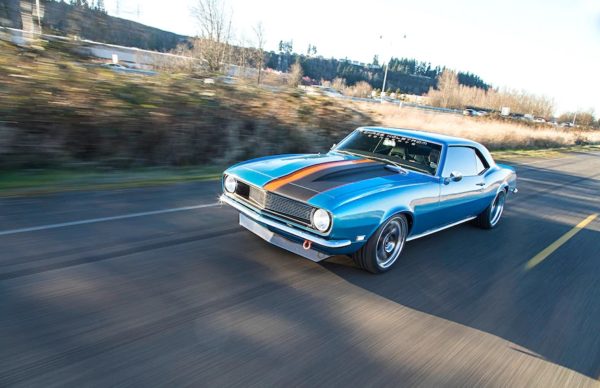 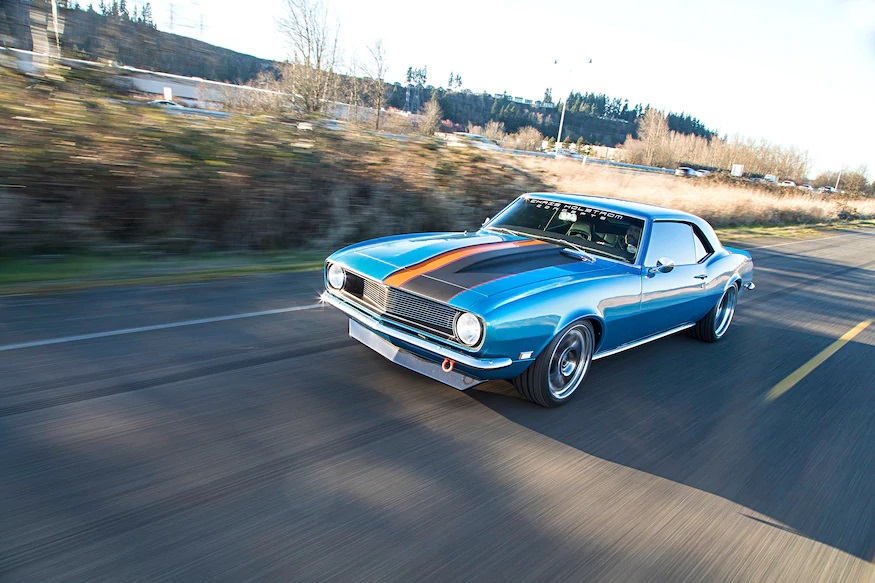 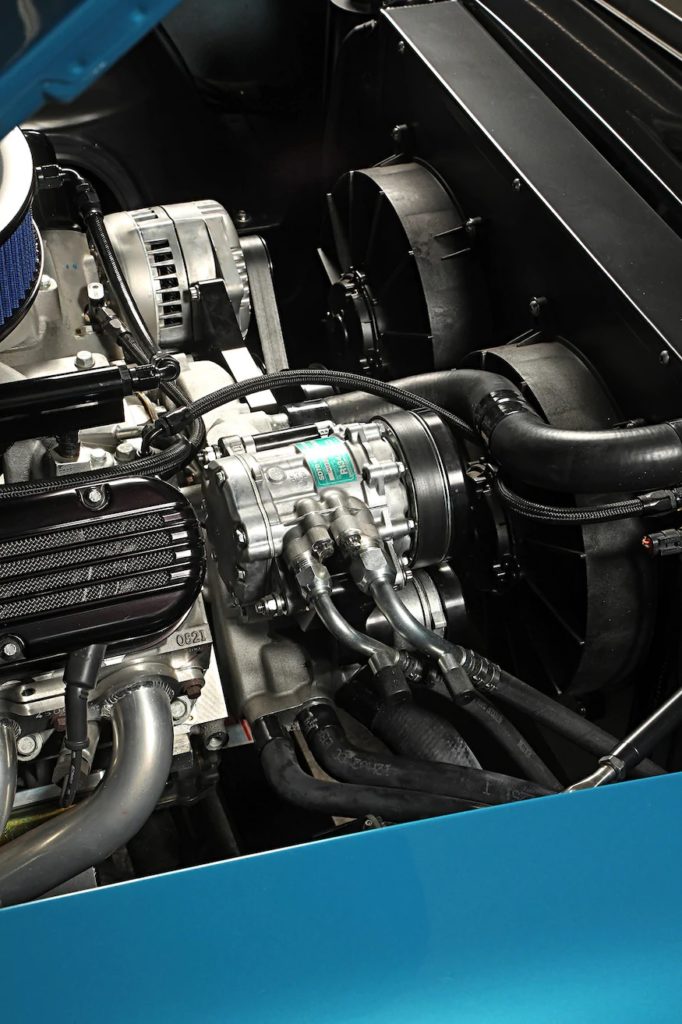 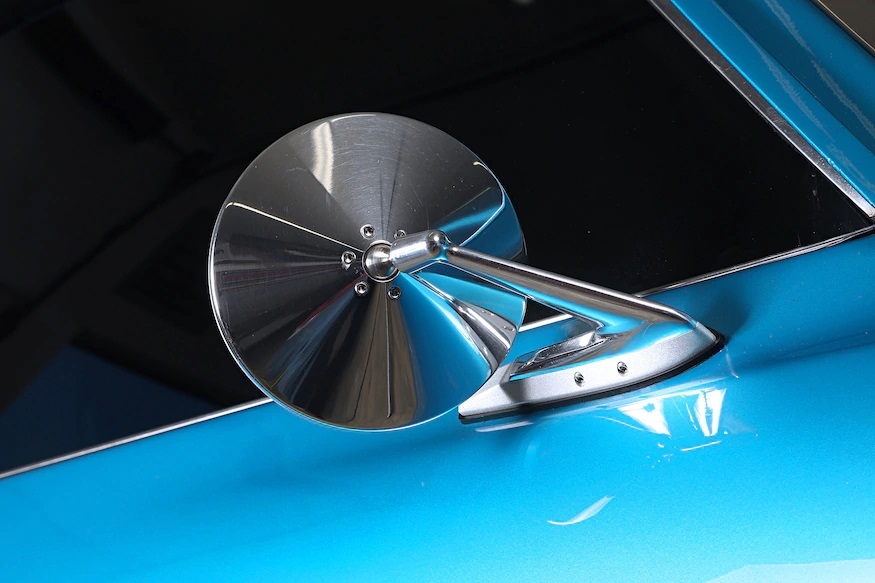 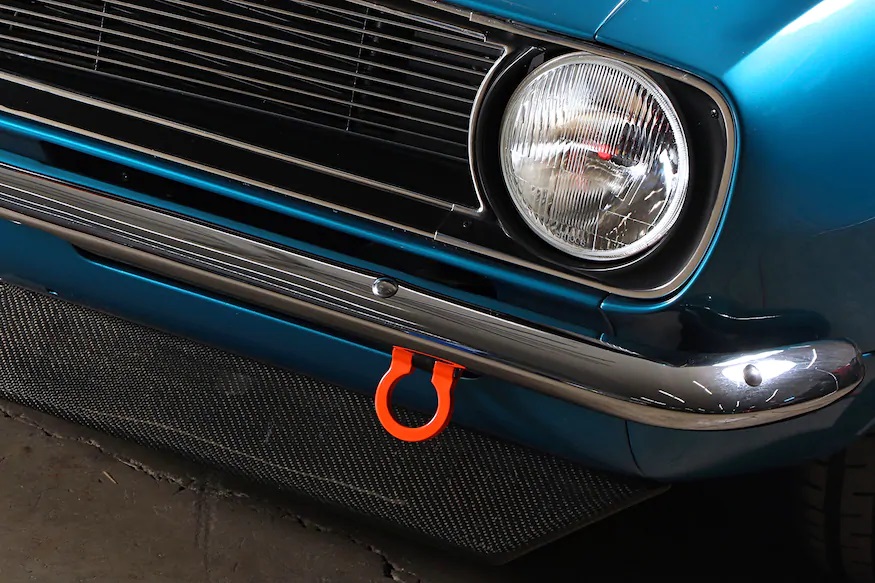 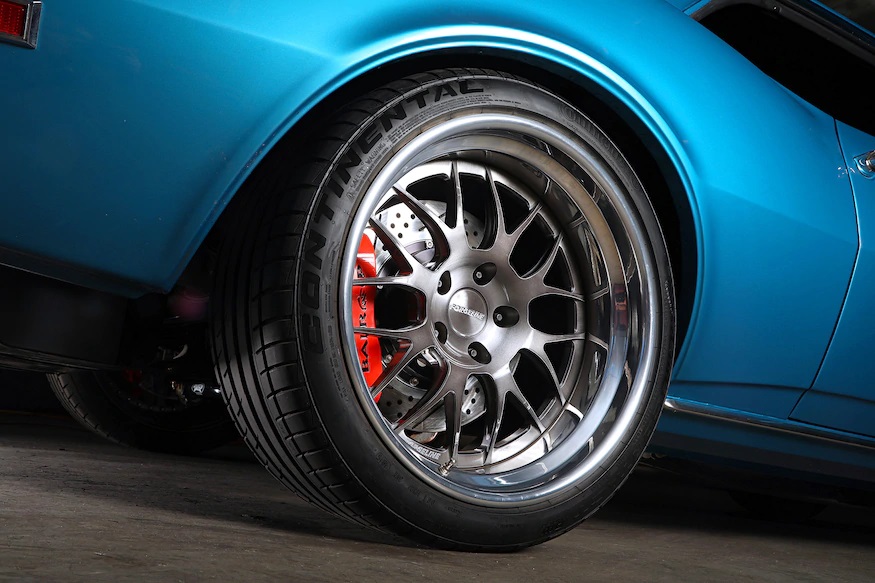 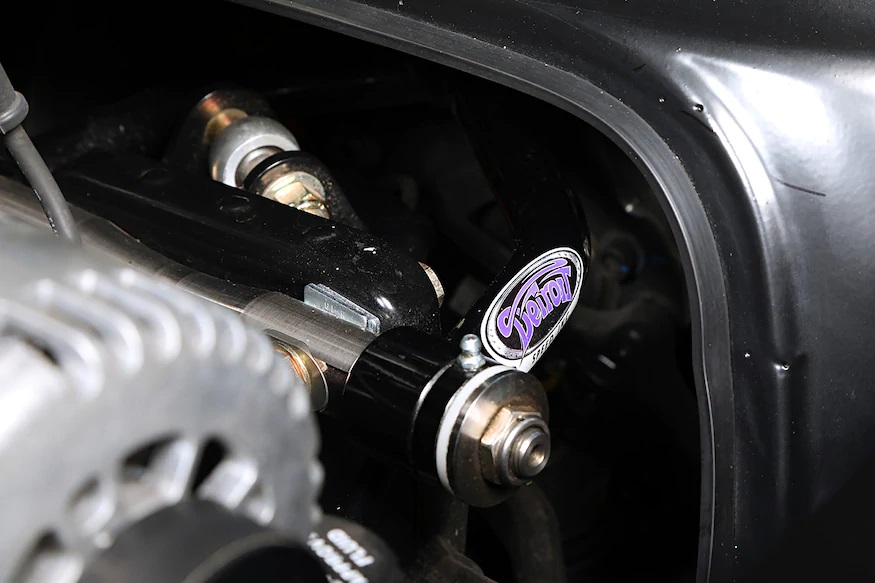 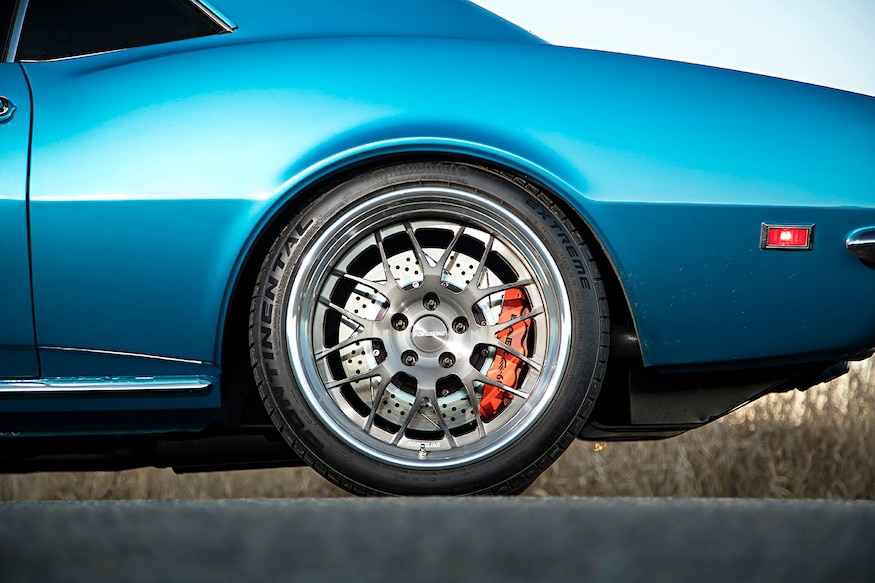 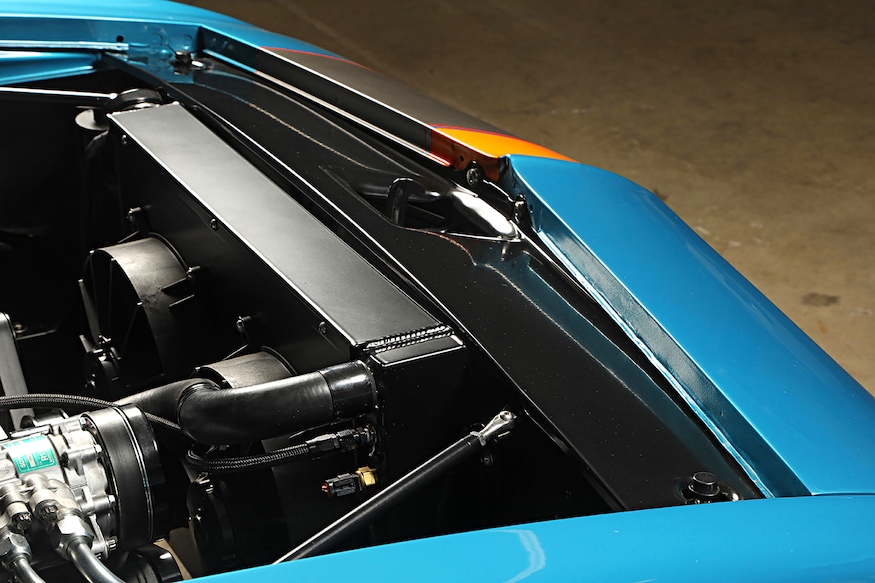 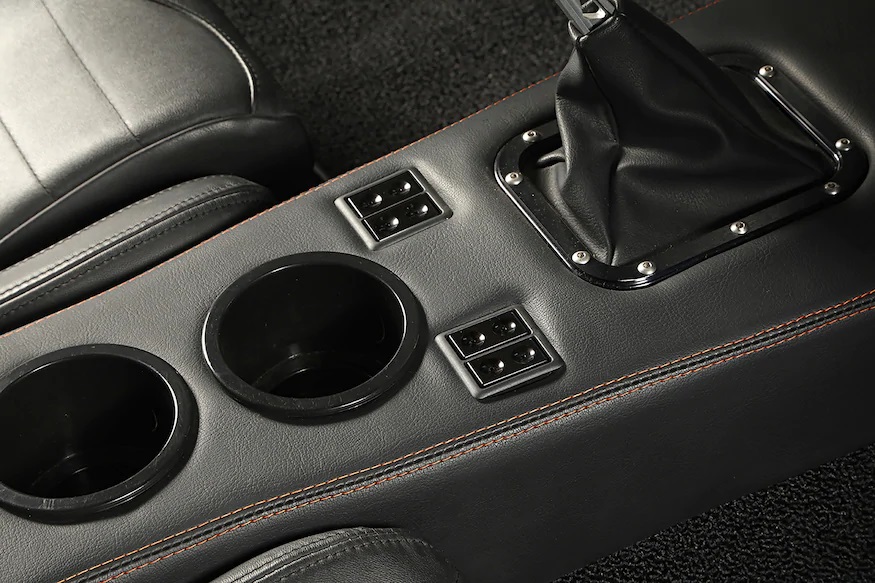